Cult of Aton - part 13: Culdean Order and The Birth of The Knights Templar


Recommended to read first: The Milesians.

When the Milesians invaded Ireland, it was basically a clash of two Sun cults - the Druids and the invading Atonists. The former were the original Sun order, the latter a corrupted Egyptian version of it.

According to Irish legends, a war broke out between the two factions immediately after the arrival of the invading Milesians. Since the Irish Druids were allies and a religious counterpart to the Amenists of Egypt, this war was inevitable sequel to the civil war of Egypt.

The Milesians managed to invade Ireland - and later on the British Isles - but destroying Druidism turned out to be much more difficult. For hundreds of years they did their best trying to kill the Druids, with some success, but they just couldn't finish the job. Destroying Druidism wasn't achieved until the Milesians found a powerful ally with a great military machine - the Romans.

After the Roman invasion of Britain, the Romans did the bidding of the Milesians by starting a systematic slaughter and mass killings of the Druids of the British Isles. Later on this ruthless cleansing was finished by the Christian Church and the so called "Saint" Patrick. 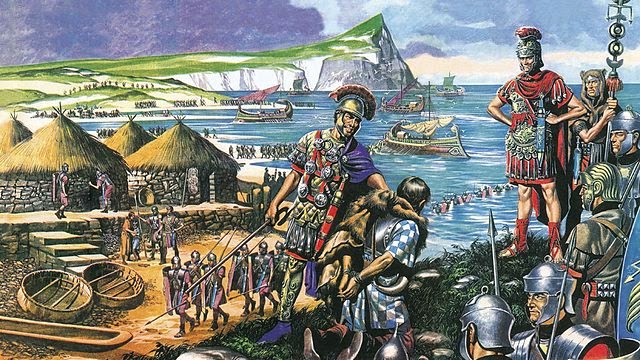 There is a hint of irony in what happened to the Cult of Aton in Ireland and the British Isles before the final destruction of the Druids. During the hundreds of years of coexistence, Atonism slowly adopted many Druidic elements.

The Atonist-Milesians established a religious organization called the Culdean Order, which was a strange combination of Atonism and Druidism. What the history books won't tell you, is that this Culdean Order was the main institution in the birth of Christianity. They established many churches, monasteries and schools which became important academic centers.

"The Culdees, who later on established schools and colleges in this country for the teachings of arts, sciences and handicrafts, are said to have derived from the Druids." - Nesta Webster (Secret Societies And Subversive Movements)


"The name by which the British Church was first known in these lands was the Culdee Church, the natural result of Christianity having been introduced by the Culdich or - "refugees". -- The Culdees established Christian churches, monasteries and colleges, chiefly in remote places. -- Eurgain, daughter of Caradoc and wife of Salog, Prince of old Sarum, found a college of twelve Christian Druids (Culdee Initiates) at Caer Urgan, or Llantwit Major. This college must therefore have been established in the first century" – Isabel Hill Elder (Celt, Druid and Culdee)


"The Atonists realized that their materialistic objectives could be achieved if they manufactured a religion that appeared to be a follow on from ancient Druidism. [...] In the early days, this religion was actually known as Culdeanism, or as Jessaeanism. Early Christians were known as Culdeans, Therapeuts, or suggestively as Galileans. Although they would be found spread throughout Europe and the Middle East, their origin was Britain." - Michael Tsarion (The Irish Origins of Civilization)

Did you know that the second pope of Rome, Linus, was the son of a British royal Claudia Rufina, who was living in Rome?

"Finally, we come to the last of the characters mentioned in the verse from Saul's Epistle to Timothy, and his name is Linus. It is this final name that links up all the others and demonstrates that Saul-Josephus was indeed speaking about this influential Romo-British family and not some other individuals of the same name. This Linus was most definitely Linus, the second bishop of Rome (pope), and he is said to have been the son of Claudia Rufina, the wife of Pudens Pudentius who we have just mentioned." - Ralph Ellis (King Jesus: From Egypt (Kam) to Camelot)

Of course, the motives for this new religion were more materialistic than spiritual. For psychopaths, religion is means to an end - nothing more.


"Indeed, a close study of history reveals that, despite appearances to the contrary, religion is less of a concern to despotic men or regimes than politics and economics. Religion is often instrumental to those secretly attempting to attain material power. This is especially true in the case of the Milesian-Atonists. The chieftains of the Sun Cult did not conceive of Christianity for its own sake or because they were intent on saving the world. They wanted to conquer the world not save it. In short, Atonist Christianity was devised so the Milesian nobility could have unrestricted access to the many rich mines of minerals and ore existing throughout the British Isles. It is no accident the great seats of early British Christianity - the many famous churches, chapels, cathedrals and monasteries, as well as forts, castles and private estates - happen to be situated in close proximity to rich underground mines. Of course the Milesian nobility were not going to have access to these precious territories as a matter of course. After all, these sites were often located beside groves and earthworks considered sacred by natives not as irreverent or apathetic as their unfortunate descendants. The Atonists realized that their materialist objectives could be achieved if they manufactured a religion that appeared to be a satisfactory carry on of Druidism. If they could devise a theology which assimilated enough Druidic elements, then perhaps the people would permit the erection of new religious sites over those which stood in ruins. And so the Order of the Culdees was born. So, Christianity was born."  - Michael Tsarion (The Irish Origins of Civilization)


"The truth concerning the birth of Christianity, which has been guarded by the Vatican and the various secret societies, is that it was a religion devised by British nobles, those descended from the Gaels and Scythians, who sought dominion over valuable mining territories in Britain, France, Europe, and the East. After its invention, Christianity was transplanted to the Middle East. The reason for this has partly to do with the similarity of Christianity's main protagonist, Jesus, and the ancient god Iesa." - ibid


Rome became the administrative center of Christianity, but the theological center was on the British Isles.


"The Atonist nobility knew it was impossible to organize and control a worldwide empire from Britain. The British Isles were geographically too far West for effective management. In order to be closer to the “markets,” the Atonist corporate executives coveted Rome."

"Once we understand that Atonist Britain was the first and true incubator of Christianity, a lot of historical mysteries are solved. When we understand how the story of Jesus was transplanted to the East from the West, we have complete insight into all that has transpired throughout the ages since Christianity took birth. Uncovering the occult history of Christianity helps us expose modern tyranny. It enables us to understand what is being planned for the future by those at the top of insidious Christian institutions.”  - Michael Tsarion (The Irish Origins of Civilization)

At the early medieval period, all the ancient mystery schools of the Druids were destroyed. The era was truly dark medieval times. The only places that could offer at least some kind of higher education and knowledge were the schools of the Culdean Order.

During that time Ireland was the academic center of all of Christendom. Monks who had studied in Ireland were considered as great learned teachers. These monks were in high demand in all over Europe. Among many, the Emperor Charlemagne invited Irish monks to his court.


"The state of learning on the continent of Europe at that time, wherever the influence of the Roman Church was dominant, was at a very low state or non-existent. It was only in the monastic establishments maintained at different points on the continent by the monks of the Irish Church that learned men were to be found. There were practically no learned men in the Roman Church at that time. Even a century later when the Emperor Charlemagne espoused the cause of the Roman Church, he had to get Irish schoolmen for instructors to teach in the palace school which he established." - Michael Tsarion (The Irish Origins of Civilization)


Because of this high demand for educated Irish monks all over Europe, another order was established. The Cistercian Order became the Continental European version of the Culdean Order. Behind it were the same royal Atonist families as with the Culdees.

Over time the Cistercian Order came to be in control of the vast network of monasteries and academic centers all over Europe. This allowed the order to become a very influential and rich organization, that owned huge amount of lands and estates.


It was during the first crusade, when another order was established as a military wing for the Cistercian Order. And so the Knights Templar was born. Their official name The Poor Fellow-Soldiers of Christ and of the Temple of Solomon is laughable. The Templars were anything but poor.

In the emblem of the Templars one can see two soldiers on one horse. Obviously two solders on one horse could not be the way to fight in a battle, so one must understand it is symbolic. The two riders represent the union of Mile and Scota - the alliance of the Scythians and the Hyksos.

Another emblem of the Templars is the crown and cross with the text "In Hoc Signo Vinces". It represents "the Elite's" autocratic (Knights Templar) and theocratic (Cistercian Order) modes of control. The same idea is in the symbol of the Princes of Masonry, the double-headed eagle.


"As we show here, the Templars were the military wing of British and European Atonists. It was their job to conquer lands, slaughter rivals and rebuild the so-called “Temple of Solomon” or, more correctly, Akhenaton’s New World Order. After its creation, the story of Jesus was transplanted from Britain, where it was invented, to Galilee and Judea. This was done so Christianity would not appear to be conspicuously Druidic in complexion. To conceive Christianity in Britain was one thing; to birth it there was another. The Atonists knew their warped religion was based on ancient Amenism and Druidism. They knew their Jesus, Iesus or Yeshua, was based on Druidic Iesa or Iusa, and that a good many educated people throughout the world knew it also. Their difficulty concerned how to come up with a believable king of light sufficiently appealing to the world’s many pagan nations. Their employees, such as St. Paul (Josephus Piso), were allowed to plunder the archive of the pagans. They were instructed to draw from the canon of stellar gnosis and ancient solar theologies of Egypt, Chaldea and Ireland. The archetypal elements would, like ingredients, simply be tossed about and rearranged and, most importantly, the territory of the new godman would be resituated to suit the meta plan." - Michael Tsarion (The Irish Origins of Civilization)